The key to successful and cultural hunting is rightly considered the ability to shoot. This is a whole complex of theoretical knowledge and practical skills. One of the main elements in it is the aiming, which is a system of visual-motor actions arrow. In other words, the ability to aim is a sure guarantee of successful shooting.

By aiming means the aiming of the gun of a certain spatial position in relation to the target necessary for its defeat. The basis for aiming when shooting both rifled and smooth-bore weapons is to align the sighting line of the weapon with the line of sight that passes from the pupil of the eye to the target, especially when the trigger is pressed, that is, the pupil of the eye must be on the continuation of the aiming line of the rifle .

For a smoothbore gun, the sighting line is an imaginary line passing strictly through the middle of the barrel sighting barrel (s) and the bottom of the front sight. When the line of sight coincides with the sighting line, the shooter sees only one fly located in the middle of the aiming bar and the upper contour of the receiver’s shield. True, many high-skill shooters shoot at a stand with a so-called “visible” bar (the pupil of their eye is slightly higher than the aiming line of the gun, about 2-3 matches tall, if they are placed on top of each other and on the bar of the gun at the official cut of the trunks )

This position of the pupil of the eye, firstly, improves the view, which has a positive effect on the perception of the target ejection (especially on the trench stand); second, it facilitates the control of the trunks during the leash.

Sight line for rifled weapons passes through the top of the front sight and the middle of the slot of the sight plate at the level of its upper edge.

In order to clearly see the object, our eyes perform a certain work. Its essence consists in reflexively changing the focusing of the eye in such a way that the light rays passing through the lens of the eye and carrying information about the object are focused on the central part of the retina. A characteristic feature of our vision is that it is impossible to see objects equally at different distances from the eye at the same time. The nearer the object that we are trying to discern, the worse the visibility of objects located at great distances in the direction of the line of sight, and vice versa.

Targeting when firing a shot

A simpler “sighting” device on smooth-bore weapons allows you to quickly give the gun the necessary orientation relative to the target, and small “inaccuracies” in the sight are compensated for by the scree of the shotgun. And if the parameters of the shotgun correspond to the constitution of the arrow (the rifle is attached), then after the appropriate training, it can achieve the correct position of the line of sight relative to the aiming line of the gun immediately at the moment of completion of the shotgun (without subsequent correction, which requires changing the focusing of the eye to the bar and fly) . This allows the shooter to almost fully focus the vision on the target, which is very important when shooting shot on moving objects. In this case, the shooter should clearly see the aiming object (especially moving), focusing his vision on it. The bar and the gun of the gun, located appropriately in relation to the line of sight, the eye will perceive indistinctly, vaguely. But if you dye the fly or the end of the bar trunk in bright colors, then the visual perception of them will be more distinct.

Experiments carried out with high-grade bench marks showed that the absence of a fly did not significantly affect the effectiveness of their shooting. 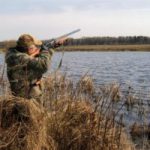 The process of aiming at a moving target, i.e., correcting the position of the aiming line of the weapon relative to the target, occurs simultaneously with the leash.

If, at the final moment of the aiming (when the trigger is pressed), the shooter will try to control the position of the fly relative to the bar or sight line, focusing his eye on them, the oversight is almost inevitable. In this case, for a certain period of time, the receipt of visual information about the movement of the target stops (the eye ceases to see the target). The connection between the work of the eye tracking system and the synchronous movement of the ends of the gun barrels is broken.

Here is a typical example. If the hunter, when shooting at a large flock of flying ducks, makes a shot “in a pack”, without focusing the vision on a particular concrete duck, the result of the shot is usually unambiguous – a slip.

Training in aiming at a fast moving target, it is necessary to achieve a constant position of the head on the crest of the box, repeatedly repeating the techniques of throwing the gun. When the shotgun rifle complies with its requirements. They are the subject of a special conversation. Here we only note the main thing: at the end of the process, the aiming line of the rifle should be directed to the point where the eye is looking (or perhaps closer to it).

Firing a shot requires the participation of both eyes, which will ensure the effective operation of their tracking system, under the control of which the complex visual-motor actions of the shooter are performed. Thus, when firing a shot on moving targets, one-shot eyes are focused on the shot object.

Aiming at shooting a bullet

Successful shooting of a bullet from a smooth-bore rifle on large ungulates (elk, deer, wild boar) and a bear is due to slightly different requirements. First, we must not only get into the beast, but also necessarily – into the slaughter place. Secondly, the accuracy of the aiming should be much higher, since the shift of the line of sight relative to the aiming line of the gun will result in a shot to the bullet deflection from the aiming point. The more significant this mismatch, the more the bullet will deviate.
Preparing for a shot at the approaching beast, the hunter is primarily 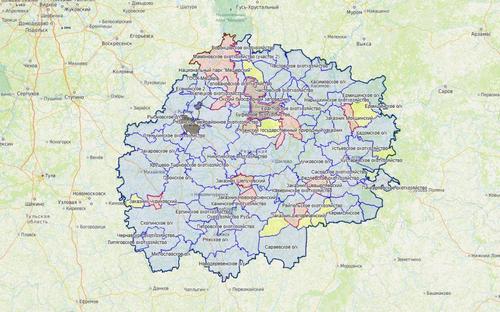