The villages of Samtatskaro, Dedoplistskkaroy district, are regularly attacked by wolves, therefore its inhabitants are asking the authorities to protect them from predators, the Kakheti Information Center reports.

According to the locals, wolves appear in the village almost every night and raise cattle. Over the past week, they pulled up cattle from Shainadze, Malakmadze and Sardalashvili.

In addition, stray dogs are no better than wolves. The video about how a DPS inspector dropped into a stopped car, fleeing from a pack of stray dogs traveling along the highway – the whole Internet spread. So winter is coming hot.

And the sooner the local authorities realize the need to regulate the livestock of gray nurses and allocate funds for this and conduct organizational measures. All the better.

According to the Zima society of hunters, in Maslyanogorsk at night a wolf came to the site and bit a goat, and he didn’t manage to pick up the corpse because people came to the barking of the dog. In the same village wild animals attempted to foal, the same fate befell the calf. So, on the pasture, the bull lost its ears and returned with a torn belly, the owners killed him in time and thus deprived him of torment. In addition, the village of Thirduspensk suffered eight sheep from the attacks of wolves.

The locals are confident that the indiscriminate attack of wolves, launched in the summer, is due to the fact that deforestation is taking place. Viktor Varlamov, chairman of the Ziminsk Society of Hunters, is sure that such a phenomenon is not the only reason.

Hunters have lost bonuses for capturing wolves, and, as is well known, thanks for no one will work, according to Vesti-Irkutsk.

In the Donetsk region, a gray wolf almost devoured a grandmother, granddaughter and woodcutter

In the village of Small Kachkary, in the Novoazovskiy district, a wolf was bitten by three people. At about five o’clock in the evening, a resident of the village worked in her garden when a wolf came to her courtyard. Most likely, the predator made his way to domestic animals, but the hostess noticed the gray and bravely became to protect her own cattle. A grandchild and granddaughter run out of the house to protect the grandmother. As a result, as they say, the whole world, and with the help of shovels, hoes and a rake, they managed to score a wolf. However, the grandmother and granddaughter in the fight got torn wounds of hands and feet, but the 14-year-old grandson got off with a slight fright, reports 0629.

Despite the fact that the wolf was able to defeat, the family still called the experts, who took the necessary samples for the study, including rabies. Alexander Lappa, the chief physician of the central regional Novoazovskaya hospital, said that all tests were sent to the regional veterinary virology laboratory.

As it turned out, besides the grandmother and granddaughter, now in the surgical department of the Novoazovsk hospital there is another person who was attacked by a wolf on the same day. The attack occurred in the hunting economy of the village of Kachkarskoe, the huntsman suffered from bites.

Alexander Lappa states that the status of all three patients is satisfactory. They will have to complete a three-month course with rabies vaccine.

Locals claim that the wolves did not enter the village by accident. The fact is that not far from the village of Kachkarskoye, there is a pig-breeding farm, which often throws waste into the forest, instead of recycling it.

Novoazovskie wolves massacred in the sheepfold

The opinion that wolves migrated to us from Russia after large-scale summer fires is confirmed. A few days ago, a flock of predators attacked the kharaar of Ilyichevsk agro-shop No. 1 in the Novoazovskiy region, staging a real slaughter in the sheep pen. The gray ones jumped over the fence at night, and the next morning the farmers missed 10 animals, and a few more sheep were bitten.

“Wolves destroy such a number of sheep only when youngsters are trained in hunting,” Nikolai Grek, director of Novoazovskiy KP, told UOOR hunting and fishing farm. – Otherwise they just take a sheep for food and leave.

According to preliminary data, there were at least 4 predators in the pack of hijackers, who acted very decisively and boldly. The very next day, hunters staged a raid on them, managing to kill two animals. Hunters say that compared to last fall, the wolves became three times more and try to respond to their every appearance.

Attacks of wolves on domestic animals are not so rare, the gray ones always did this. True, predators prefer to rob carefully, trying not to come across to people. For example, a couple of months ago, in the same Novoazovsky district, a wolf grabbed a sheep right on the pasture, but threw it after the shepherd chased him in the cart.

By the way, the number of foxes in the region also increased by about 2 times. As you know, foxes are the main carriers of rabies, so their number is also trying to regulate. In addition, autumn vaccination against rabies is taking place now – hunters and foresters scatter bone-flour-sized bait in the forests. Inside the briquette is a capsule with a vaccine, by breaking through which a fox or a wolf gains immunity against a dangerous disease. Veterinarians do not recommend feeding baits to dogs and other pets, but insist that there will be no particular harm. 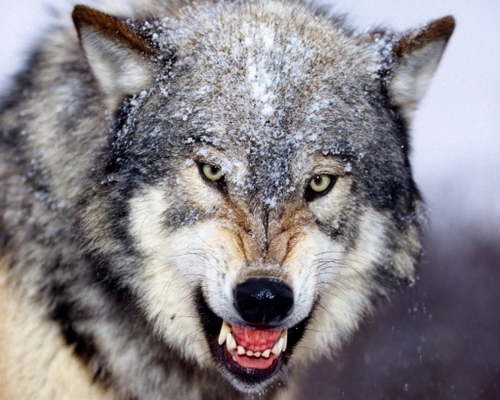