As a nozzle, they are little used, especially compared to animals – a worm, moldy worm and moth. And in vain! Bream great on them bite. They are used both independently and in combination with other plant and animal nozzles. 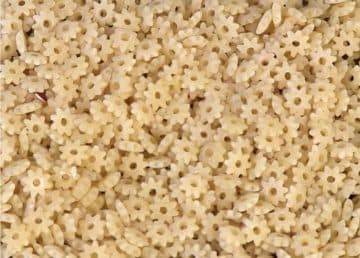 Bream well takes on pasta. Catching them can be done in different ways, including in the winter. There are many subtleties in how to cook pasta, plant them on a hook and catch them, and many of them will be discussed further.

Before buying, you should immediately clarify one question: medium-sized piece macaroni is suitable for fishing. They can be in the form of asterisks, horns, spirals. The main thing is that their size is not too large, so that the bream can come up and quietly draw them into the mouth with a hook. Stars and horns are most common among pasta lovers, as they are the smallest. However, if we are talking about the capture of the trophy, you can try to catch large ones. Definitely, spaghetti for fishing will not work.

Among the brands usually chosen some one. There are a great many manufacturers and varieties. However, it makes sense to choose one pack, which is suitable for fishing, and in the household will not be superfluous. We need to know how these macaroni are cooked, how long it takes to prepare a good nozzle that will not fall off the hook and will be attractive to fish. When cooking, you need to use a stopwatch to know what the result will be. In any case, it will take a lot of experiments.

Another question is the price of pasta. Usually quite expensive Italian pasta is prepared purely from solid wheat varieties. Cheaper ones have flour made from soft grades or those hard grades that give lower quality flour. Usually they boil softly – all housewives know it. Finally, the cheapest macaroni is almost always too soft, and they almost never stand on the hook. It is best to buy all the same rather expensive, because if necessary, it will be possible to boil them to a very mild condition. But from the cheap dense nozzle will not work.

The easiest way to master the preparation of pasta for fishing on very small products. Those are asterisks. They have the smallest mass of one macaroni. Also, stars are well suited for catching not only bream, but also smaller fish – roach, white bream, white-eyed. They can be caught on the float bait, and bottom gear, too, and for winter fishing, they are used more often than others.

Cooking pasta is almost the same as for eating. First, boil a pot of water and add some salt. After that, pasta is poured into water and cooked for several minutes. Then they are drained and placed under cold water to make them crumbly.

In our case, the cooking time will be very small, since the stars themselves are very small. Cooking can take place in a saucepan. But given the fact that for fishing pasta should be relatively little, it is wiser to cook in a colander. Pasta, as many of them are necessary, fall asleep in a colander, and then it is placed in a pot of boiling water, with a handle and horns on the edges of the pan. After that, the colander is removed and cooled pasta under the tap with cold water.

Cooking time is determined experimentally . Macaroni should be such that it can be quite easily broken into two parts with your fingers, but in order to crush, it would take more effort. As a rule, for float fishing they cook softer pasta, as well as for winter. But for fishing on the donku use more rigid. Therefore, a stopwatch or watch is always desirable to have on hand.

After the pasta is cooked and drained, they must be dried. For drying using a regular newspaper. They are poured on it and laid out in a thin layer. After the paper absorbs water, the pasta is well separated from each other. They can be collected in a jar for attachments and go fishing.

A more advanced method of drying pasta for bream is drying on breadcrumbs. Sprinkle crackers on a baking sheet or plate, and then just merged, still warm macaroni is sprinkled there. They are in this state give good water. In addition, the nozzle sprinkled with breadcrumbs when fishing creates additional turbidity in the water, a smell that is attractive to fish. It is even better to use ready dry bait like “Geyser” of small fraction, or the one you are going to catch, instead of crackers. It is flavored with fish flavors and additives, which she also likes.

Larger pasta must be cooked a little longer. Usually cooking time is directly proportional to the size of one macaroni. If for stars it is minimal, then for horns, each of which weighs about twice the size of an asterisk, it will be twice as large. Using macaroni of the same brand, but of different types, it is desirable to take this into account. True, the end point in the matter of cooking time is put by all the same experience, and not only the sensations of the fisher, but also the bite of the fish. It is possible that it is worth fishing to take a couple of different variants of the same pasta, but cooked in different forms.

Roasting pasta is another way that some anglers use. For roasting, use only pre-cooked pasta. At the same time, they can even be a little overcooked. They are fried for literally ten seconds in a frying pan with the addition of oil, stirring constantly. At the same time, if the pasta was initially too soft, they become much more elastic and stay on the hook better. Oil also gives them a good smell and appeal. Fried pasta is removed from the pan and roll in breadcrumbs. The main thing here is not to overcook, as the fish will peck at the overcooked food much worse.

How to put pasta on the hook

When using vegetable nozzles, you should always remember that the success of their application depends half on not how the nozzle was prepared, but on how it was planted. When fitting it is necessary that the sting hook pierced the macaroni at least once, but it was well hidden in it. You also need to choose the length of the hook, so that after the nozzle from the body of macaroni sticked out as little as possible of the forearm with the eye, but it was nevertheless convenient to stick on, and there was a reason to keep it.

The asterisks are usually put on several pieces, piercing them away from the central hole through, and at the end one star is planted across, so that the sting of the hook is entirely in it. Or use a sandwich, sitting on the end of the moldy worm. This practice shows itself very well in winter, because the stars on the hook can be strung through a hole, which is more convenient to do with frozen fingers than to press on it and pierce it.

Horns are placed a little differently. First crochet one horn through both walls. Then it is slightly shifted, and the other half is pierced, but in this case they try to hold the sting along the wall so that it is hidden, but it goes to the edge of the horn. The result should be a horn, the bend of which follows the curve of the hook. The size of the hook is best to choose, based on the size of the nozzle – this is very important, otherwise it will be inconvenient to stick and the macaroni will not hold well. The author did not use other types of pasta, he only guesses how to stick them, but his friend caught it in spirals. Apparently, there is not much difference, the main thing is to pierce at least once and then hide the sting.

Pasta – quite situational nozzle. There are ponds in which they show themselves superb. There are places where they do not bite at all. However, they have one feature – they just perfectly cut bites trivia. This is the ruff, which is the most annoying to the ratcher and fiderista, and roach. Even a large roach is almost indifferent to the horns, sometimes it can take asterisks one by one in a sandwich with maggots.

Thereby, the bream will have more time to be able to come up and take the nozzle. They are cooked from durum wheat, that is, the same material as semolina. And we all know that this porridge is perfect for catching bream, however, and she loves little things. That is, macaroni is a reasonable choice when you want to catch a good fish, even if you have to wait a bit more.

The best pasta work in the summer. In winter, it is more efficient to catch fish on the game, and to imitate something live with macaroni is not quite rational – the fish can recognize deception. However, sometimes it rolls, and macaroni can be played up a little, using them when fishing for winter float fishing.

As a donkey attachment, this is generally an excellent thing. Pasta that has been well cooked and hooked can hold several casts. However, it is better to change them, as the rusks are washed off during their stay in the water. Macaroni keeps well both on a current, and in still water. On the muddy bottom they do not sink, but continue to lie due to the low specific gravity and support area on the surface of the silt, being noticeable to fish.