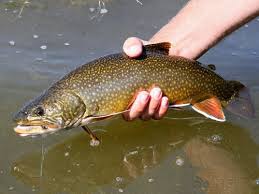 Appearance: A man-made hybrid of female lake trout and male brook trout produced mainly in hatcheries, splake will exhibit any combination of the characteristics of their parent species. Because of this, hatcheries will often remove a fin from splake before releasing them to aid in identification.

Distribution: Splake thrive in cold waters (at or below 68 degrees Fahrenheit), including waters where brookies and lakers have difficulty surviving, and are more commonly found in rivers than in lakes, though they’re capable of surviving in both.

Spawning: Splake are capable of spawning in the wild, in the same manner as their parent species, though in such cases they will almost always back-cross with one or the other parent species and lose their unique hybrid characteristics. So far, there have been no documented cases of distinctive splake populations sustaining themselves in the wild.

Angling: Splake swim in deep, cool waters during the summer months, particularly around reefs, feeding on smelt, perch, insects, and crustaceans. During cooler weather they move into the shallows to feed on the eggs and recently-hatched fry of other species.

Casting or trolling with spoons, jigs, and spinners or live bait are the best tactics for catching splake, with fly fishing sometimes proving effective during the early spring and lake fall. Splake are also active in the winter, and popular with ice fishermen. Like brook trout, they tend to spook easily, demanding a stealthy approach. Once hooked, however, splake lose their timidity and are known to be tough, acrobatic fighters.