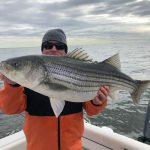 Appearance: Dark olive to steel blue on top, with with silver sides and a white belly, striped bass get their name from seven to eight dark, horizontal bands that run the length of their bodies.

Distribution: Native to North America’s Atlantic coastline, striped bass have been stocked throughout the continent since the 19th century, and now thrive along both coasts and in many large lakes and rivers between (especially in Texas).

Because of their popularity as game fish, stripers are also stocked in smaller bodies of water, though in such cases they will not spawn and the population must be artificially maintained. Sharing roughly the same range as largemouth, stripers prefer deeper, rockier waters with temperatures between 70 and 80 degrees Fahrenheit.

Spawning: Stipers will spawn in late winter in the south, or as late as early summer in northern climes, when water temperatures enter the 60° to 68°F range. The unusual spawning habits of striped bass call for very specific conditions to be successful. Instead of adhering their eggs to structure or vegetation or building a nest at the bottom, stiped bass females lay their eggs in a very strong current, where they remain suspended from fertilization through hatching.

Because the eggs will drift during this time, it is necessary for the current to continue un-obstructed for up to 50 miles to assure successful hatching.

As many as eight males will follow one female, who will release hundreds of thousands to millions of eggs for the males to fertilize. Once accomplished, the eggs are left unprotected, floating in the current where they will hatch in roughly 2 days. Striped bass fry survive on their yolk sacs for about a week, moving on to plankton and eventually other fish as they head towards open water.

Angling: Voracious predators, striped bass will eat anything smaller than themselves that moves: herring, flounder, eels, smelt, shad, minnows, worms, crabs, crayfish, squid, insects, etc. They are most aggressive at night, and generally shy away from light in general. Stripers are especially aggressive in the pre-spawn period, before they move upstream.

Casting into deep river pools, below dams, or along the drop-offs of a rock-bottomed lake are all good bets. Live bait or brightly colored artificial lures on medium tackle makes for the best striped-bass setup. Typically, a fisherman need only allow a weighted bait to sink slowly into a deep pool or drift suspended at the edge of a fast current to trigger a strike by a striper. Though aggressive, stripers have a fairly gentle bite, and anglers should be ready to set the hook and start reeling the fish in at the slightest signal (especially when the current is strong).

During the spawn, it’s possible – albeit challenging – to catch stripers by fly fishing. In the summer, after the spawn, depth finders and temperature sensors are often useful for locating striped bass in the deep, cool layers of a lake or river. Sometimes it’s easier to located schools of baitfish upon which stripers prey than it is to locate the stripers themselves. Since stripers will move constantly throughout the day, it’s often effective to troll over a very wide, deep, rocky area until a strike is triggered.