The carp does not like ponds with a strong current. That is why the best places for his fishing are quiet ponds, small lakes and small rivers . 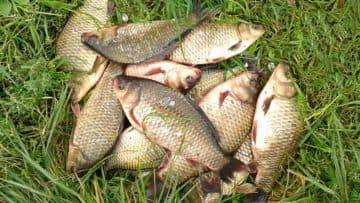 Small and medium-sized fish often stay a little closer to the shore, but the larger the individual, the deeper it goes.

The key feature of the crucian carp is that it is a very shy fish, and with any noise it can quickly leave its parking lot.

The best places in Russia for fishing on a crucian

There are many reservoirs in Russia in which this species of fish lives. The best known are: Elk Island , Klinskoe Reservoir , Dnipro and Ladoga lake . It is in these places there is a large population of crucian and other species of fish.

Where in the Moscow region to catch a crucian for money

Near Moscow there are more than 50 paid reservoirs in which almost all types of fish are found. The most popular and most expensive places are FishCamping, WOOMARC, the Aquatorium and Royal Fish.

In addition to them, there are places cheaper, like the reservoirs at Tablovo, Zobovo and Cheredovo, where there is a well-equipped territory, shops, recreation areas and even small hotels, lakes Trostenskoe, Glubokoe, Timiryazevo, etc.

50 km from Moscow is the village Ogudnevo, where there is a fishing estate “Golden Crucians”. This is an expensive place for those who do not want to watch the fixed float for hours, however, they will also have to pay for such pleasure. The cost of fishing per person is 2000 rubles. This amount includes fishing without restrictions, not counting sturgeon. Accordingly, for catching carp, this place can be ideal. In addition, the estate has a landscaped area, gazebos, barbecue facilities and other amenities that are usually not available in free water.

This type of fish comes out of hibernation rather early, only 15-17 days after the ice has left the reservoirs. At this time, it is better to take earthworms as bait, because the fish begins to actively feed.

But the most favorable period for catching a crucian is summer, because it is at this time that the fish manifests itself most actively. By August, however, the peak of catching a crucian leaves, and in the fall it is extremely rare to be caught in large numbers.

What the biting depends on 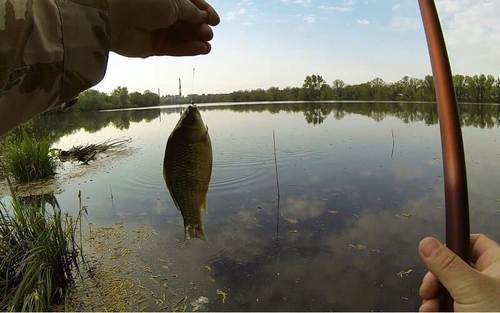 How the crucian carp bite will occur depends on many different factors. In addition to the season and suitable weather, it is also necessary to take into account that the crucian loves a certain depth (about 2-4 meters in places with a sharp change in depth), and also lives near a large amount of aquatic vegetation.

You also need to choose the right gear and bait, because this type of fish can be very picky about certain types of food.

What to catch a crucian

Fishing for the bait

Fishing is possible in one of four ways:

The first method is used in the case when the usual float rod has a blind snap. This method is best when fishing in calm water or in the presence of light wind.

The second method, the plug, is the use of a plug rod, which consists of a large number of knees. This method makes it possible to lure a crucian carp point and catch it at a distance of up to twenty meters. In addition, such a fishing rod can be used in any conditions.

The third method is the use of a rod up to 4.5 meters, which is equipped with carrying rings. It can also be applied in any conditions.

The Bologna method is almost the same as the match one, but only for fishing is used the telescopic rod, which is more suitable for fishing in conditions of possible flow.

Catching on such a tackle makes it possible to get a crucian that lives far from the coast, luring it as close as possible to a prikormochnoy spot. At first, the crucian carp feeds in, and after 20-30 minutes you can begin to fish. If the bite does not go, you need to change the place of feeding.

Such fishing allows you to avoid the negative effect of a strong wind or a small current, as well as in cases when the fish is kept at a great distance from the coast.

Any type of bottom gear is suitable for carp fishing, which is why fishermen often choose this particular method of fishing.

This tackle is the most effective in order to catch a carp, as evidenced by its name. This is due to the fact that when using this equipment crucian just can not get free. This leads to the fact that this tackle is forbidden in any sports competitions in fishing, because with it the fisherman does not need to have any skills. The fisherman has only to pull the prey to the shore, having heard the bell, and again throw the rod.

This tackle is a cube of the crown, in which four hooks are inserted. Carp are usually targeted at it, but if the carp is small and there is a lot of small and medium crucian carp, it will also work fine. By cutting off small prey, the crown marrow gives you the opportunity to pull out larger fish.

The essence of this tackle is that the hooks and lure are in the same place, and the fish cannot get to the lure by swallowing the bait. In the usual cork is added lure, after which it is tightly closed and there are already hooks outside. This tackle is great for carp fishing.

This is a distinctive type of bottom gear, the essence of which is that between the fishing line and the sinker is a shock absorber made of gum. Then, when pulling gear, you do not have to remove the sinker from the bottom of the reservoir.

This is the usual gear for many fishermen. Next to the hooks is a spring, which is laid lure. The fish cannot eat it and swallows baited hooks. 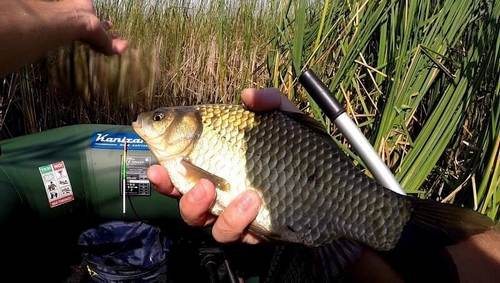 For carp fishing it is necessary to choose the right float, which will also be convenient under certain weather conditions. The most convenient for carp fishing are considered to be cylindrical floats or with a thin body. They are called “feather” or “needle”. They have a light weight that the carp does not feel.

The luck of fishing in most cases depends on how the crucian carp was lured.

IMPORTANT! An ideal bait for crucian carp does not exist, because in different reservoirs the fish reacts to food in completely different ways.

The following ingredients are considered the most logical basis for the preparation of complementary foods:

In the spring or summer, the lure should include such species as bloodworm, maggots or crushed worms.

The most used and popular carp baits are:

At different times of the year and in different bodies of water, fish react differently to each of the baits, so fishermen often determine for themselves which bait to use.

Cooked with their own hands

In summer, the crucian carp usually responds better to plant baits and baits. Consider some of them.

Three main types of bait are made from semolina: talker, dough and boiled “cool” semolina. The choice of species depends on the preferences of the fisherman.

Barley is a common choice for fishermen, but it must be properly prepared and prepared for fishing. One of the nuances that many people forget about is that when cooking it you have to salt it, which will attract more fish.

The main advantage of such a bait – the dough quickly lures the fish, creating a fodder cloud, to which the carp reaches. In addition, it is convenient and easy to prepare and transport to the place of fishing.

This option is used when fishermen know that fish in a certain body of water reacts weakly to other types of bait.

Millet is considered one of the most effective ways of feeding and catching crucian carp due to its color and smell, however, it should be borne in mind that if it gives even the wrong smell or does not have a very bright color, it can significantly reduce its usefulness when fishing.

Catching carp from the shore is difficult, but at the same time it is the best way. It is only necessary to understand that the crucian carp does not live very close to the shore, and it must be fed before it starts fishing. It is also necessary to take into account the weather, because with strong wind and rain on the coast it will be much more difficult to catch a crucian.

The boat is the most convenient way to catch a crucian, because it provides an opportunity to get to the places where it lives. Often it is a place with a large number of coastal algae, from which it is not possible to fish.

The main advantages of night fishing:

Fishermen give the following tips on how to catch a crucian:

Thus, we considered the main nuances of catching carp taking into account weather conditions, tackles and fish behavior. It is necessary to understand that in each place there will be individual factors, under which it is necessary to adapt to achieve the highest bite.