It is not at all necessary to rush to the workshop immediately or completely disassemble the snowmobile; Buran can be mastered independently, but this takes time and desire. 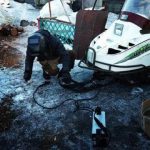 Snowmobiles can now be seen the most diverse. Everyone acquires this miracle of technology for themselves according to certain characteristics, speed is important for someone, and someone seeks to conquer the snowy mountain peaks.

But for the northern regions of our country, domestic units are more suitable, although they are less attractive purely externally, they cannot be found equal in performance.

Experienced masters who manually went through more than one unit of this type recommend this:

For deeper checks, you need to have at least some idea of ​​the mechanism, do not disassemble the snowmobile and even more so the engine, if you do not understand this absolutely.

I would especially like to note the Buran snowmobile, which is considered a sign of prosperity among the Chukchi and their neighbors in the region. The endurance of the unit is high, it will overcome various difficulties without problems, but breakdowns sometimes occur. Sometimes masters puzzle for a long time how to start a Buran snowmobile, everything seems to be in order, but the motor stalls. In the causes and methods of their elimination and we will understand further.

Reasons not to start the Buran snowmobile

There can be many reasons for engine failure, each of which requires a thorough check of one or another part of the system. For those who do not like to fool around, you can simply contact the nearest workshop, any specialist versed in motor vehicles can easily find out and fix the problem. But it’s better to figure it out on your own, while you will additionally learn the degree of deterioration of the engine from the inside. Next, we dwell in more detail on each of the most common causes.

Stall on the go and does not start already in a pre-warmed form the motor on the Buran can for several reasons. First of all, it is necessary to carefully inspect the unit for freezing ice or snow sticking, and only then investigate further.

It’s bad to start up hot because of this:

In other cases, the Buran will not stall while the snowmobile is running, and if this happens, it will start immediately without any problems.

Often on forums, hunters and fishermen discuss the same topic with similar indicators. After the trip, everyone got to their destination, and after spending the night they could not make a snow.

The reason may lie in several divisions at once;

If the start-up procedure is accompanied by popping in the muffler, then the reason for this phenomenon was most likely the depletion of the fuel mixture during suction.

In this case, there are also several reasons, and they must be carefully studied.

This is most often due to:

Everything else must be understood in more detail and individually.

How to start a snowmobile Buran

It is preliminary to find out what is the reason, because for one case it is a saving straw, and in another it will not help at all. If it is impossible to start a snowball on a hot one, then it is better to wait for the engine to cool, but not completely. In the cold, on the contrary, it is necessary to warm up the main parts of the engine, including the candles.

Repair cost and other troubleshooting methods

Repair work in the workshop will definitely cost a pretty penny, with each workshop having its own prices. It should be understood that for less than 5,000-8,000 rubles, no one will do anything with your Buran.

You can fix the malfunction only by finding out the reason, for this you need to carefully examine your vehicle. Remedies and causes can be combined in the following table:

When the engine overheats, it is necessary to allow it to cool in a timely manner, otherwise the snowmobile can stall halfway.