The new model differed from its predecessor by a caterpillar (HUS). The previous version had rubber-metal material from belts, which were connected by metal plates. In the updated version was installed HUS solid-cast type – reinforced. 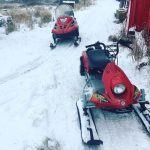 Snowmobile “Laika 2 m” was made more than thirty years ago by the company “Promsvyaz”. It was produced first for departmental purposes. In the beginning, the light version “NAMI095BA” was developed, after which, on its basis, snowmobiles called “Amurets” were produced.

They made devices in Khabarovsk. There were few of them, not more than 100 in 12 months. In the 70s, Amurets was fixed and the new version was called Laika-2. In the late 90s, development was curtailed because it began to lag behind foreign models. Most snowmobiles gradually switched to private owners.

The machine is utilitarian, as it is designed for passengers and for transporting goods on any type of snow.

Features of the device, a combination of four-stroke engines and low weight give the “Laika 2M” certain advantages over other models:

It is recommended to learn more about the parameters of the model released in the 70s.

The technical characteristics of the Snowmobile model Laika 2M are presented. It is recommended that you familiarize yourself with them before you buy the device.

Parameters of the modern model of snowmobile “Laika”:

Caterpillars are mounted with shafts from the Burana basic build. On a single, the first HUS is shorter, other parts, in addition to the hull, were used from Russian motorcycle and snowmobile equipment with modifications.

“Laika” is small in size. It is an individual means of transporting people, transporting small goods along snowy paths, lakes, and marshes.

The power unit is equipped with a centrifugal cylindrical-shaped device that protects the tractor from independent movement during engine start-up and allows you to slowly pick up speed.

The snowmobile includes a 6.5 horsepower Honda engine with a flow rate of 1.8 l / h.

It is provided with simple and reliable metal grousers. The design of these elements do not include rollers.

The caterpillar is shorter and the all-terrain vehicle is maneuverable. Due to the ski mounted on the entire plane of the ski, the resistance to movement decreases, the permeability increases.

The large slip area, the absence of effects of freezing, snow, increased load capacity and low weight reduce the force required to transport goods. “Laika” has its drawbacks, the HUS may break. It is important to know how to properly change it.

In the period when the Laika became popular, it was almost impossible to find spare parts for it. Happy owners of this car faced the problem of replacing the track. It was important to resolve the issue of which spare part to install in return.

There are various positions on this subject.

It is recommended to consider one of them (verified):

And at the end, collect all the elements together.

Due to the fact that the MD caterpillar is longer, it is possible to raise the car from the ground by a few centimeters – this is a big plus. In deep snow, the car no longer sank, did not get stuck. True, it was additionally necessary to change the track of the skis and pull out the fasteners of the turning elements beyond the boundaries of the body.

Skis are also lowered a few centimeters. At the same time, resistance has become greater. Another replacement of the HUS provided the opportunity to get rid of such a problem as stuffing wet snow on the head shaft.

The device has ceased to be produced for a long time, the age of the remaining species is large. For this reason, it is important to maintain the machine.

This procedure does not differ from serving Buranu:

Next, the question arises of where to buy it – it is better in the nearest store for winter equipment. But if not nearby, then you can find on the Internet and order.

During the replacement of the motor there is a need for the conversion of lighting. Generators on these engines are often weak, therefore, replacement of LED lamps is required.

Before buying, it is advisable to find out about the price for the Laika 2M model. At the moment, this device is discontinued, so you can buy it only from private traders. Depending on the configuration, replacement of spare parts, the price may be different.